blue leader is baltimore based artist robby rackleff's alter ego. he serves as a personification of the history of video games. he began performing as blue leader as early as 2006. he was inspired by the video game magazines he read as a kid, and tried perform in a way that didn't criticize video games to differentiate it from his other work. he began the series "dark fortess occult master of space", which he set out to create as a bible for video games.

Robby Rackleff, also known, as Blue Leader is a Baltimore based performer and video artist. The character of Blue Leader is from Robby’s website, Do The Math Comics. “We are united by our belief in non-real worlds and an obsession with digital destiny” 1. This excerpt from one of Blue Leader’s speeches is a testament to Robby’s intense passion for video games. Robby, a native of Florida was first introduced to video games at the age of 12. Since then, he has graduated in 2009 from the Maryland Institute College of Art (MICA), Mount Royal School of Art with a MFA.

Throughout these years, Robby wrote comic books with the Blue Man as a character, one similar yet purposefully different from the X-men Cyclops. Comic books proved not to be the medium that Rackleff would ultimately work through. Robby began a one-man cast video series, Dark Fortress Occult Master of Space. While he was beginning to develop the series, Robby intended for each video to reference language specific to the world of video games. His video series was to become a “bible for video games”.2 Each video would present a genesis story of a video game. During his presentation in class, Robby pointed out that in an attempt to differentiate his work from other game art, he tries to create “pieces that do not criticize the video games”.3

While the series has not taken on that particular plot, his audience has been introduced to additional stories of Blue Leader. The videos have multiple avatars/profiles, which has contributed to the development of an engaging story line that does not fail to entertain audience. Within the videos (and other pieces), the elaborate backgrounds demonstrate Robby’s genuine appreciation of historical architecture, such as ruins and castles.

One of Robby’s pieces6

Robby also performs around the Baltimore area, dressed up as Blue Leader. As he delivers dramatic speeches, electronic music and mash-ups of video games are projected as a backdrop. His eccentric performances have been noted as one of the more intriguing acts of Wham City, “a group of independent artists [that] …collaborate [and]… make art shows, theater performances, music shows, festivals, etc” in Impose Magazine article.4

I’ve posted a video of Robby’s web series; please take the time to watch it. While you are watching the video, pay attention to the sounds. The sounds explicitly used intensify the viewing experience, placing us in the environment of the video.

Robby continues to perform and release videos for his web series on YouTube. His career, thus far is a testament to not only his strong emotional connection to video games, but also to the fact that video game graphics should definitely be considered a form of art.

Robby Rackleff, an MFA graduate from the Maryland Institute College of Art, got his first video game from his hippie parents who were trying to lessen the blow of their divorce. It was a Game Boy… and then it was a Sega Genesis… and now it’s been every single console made since then.

A true fanatic, Rackleff has turned his life as a gamer into a surreal identity named Blue Leader. Blue Leader is the star of Do the Math Comics, a story arch built around the idea of all the X-Men “just hanging out talking about video games,” and several short films narrating the birth and evolution of the game systems that have brought Rackleff to alternate realities.

Here’s a bit from an interview Baltimore City Paper did with Rackleff that sheds a little more light on his obsession inspiration:

CP: Your video game lectures are often presented alongside bands, DJs, art openings, and other more typical forms of independent culture. Should people think of video games as an art form?

RR: There are a lot of games that can be considered works of art. Like Okami, where you’re this benevolent wolf being who’s bringing beauty back to a world that’s being manipulated and terrorized by alien demons. It’s so awesome. It’s such a direct opponent to something like Gears of War, which is about surly bad-ass dudes who are just slamming each other, yelling, “I love guns, and I love this shit, and I love blowing shit up! Yeah!”

Rackleff’s Dark Fortress Occult Master of Space: GENESIS GENESIS will be featured as part of Thursday’s Alternate Selves Film Screening, but here’s another sample from this unusual character, this time depicting the curious beginnings of Nintendo. 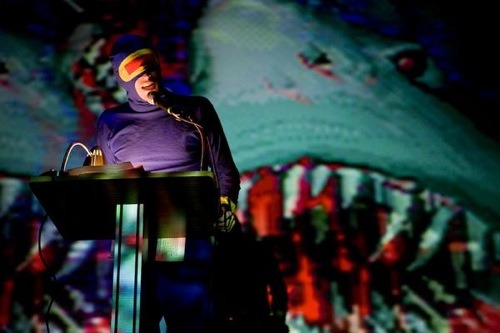 If you look to the scene and heard section of this website you might notice a few hundred pictures and a few thousand words already devoted to Whartscape, but I wanted to set aside just a little more space for one of those strange performers who lend Wham City that extra weight of a “collective”, because it's these artists who expand Wham City's niche from strange music and strange parties into performance art the likes of which have only been half-imagined before. Ed Schrader might play with the format of the late night talk show host, but Blue Leader assumes the posture of a stump speaker with the despotic ambitions of Wario. It's the project of Robby Rackleff, a graduate student at Maryland Institute College of Art.

What makes his speeches so engaging beyond the clever wordplay and underlying attempt (successful in my opinion) to describe power relationships in the brutal language of videogame hyper-violence, is that he does it in a blue, full body jump suit and he might be able to shoot lazers from his orange mask. He also brings a carefully cut up mash up of video games for projection and a backing track of dark, doomy electronic music.

Oh you blistering, speedy jointed thumb master, you've swept me off my standing yet again and now I am at your mercy! These matches go by so quickly now that we've mastered the combos out of that magazine. You've learned that more complicated maneuver I told you about! You are a sneaky kind of friend, but I enjoy the surprise of seeing myself killed in that new way! Can you imagine the amount strength you must wield to pull off such a feat. You've torn a large part of my body right off.

This is the better of the two home versions. I can tell because the blood stays on the ground longer in this one than in the other versions. It doesn't just fly off your body and vanish. It collects in pools.

We are united by our belief in non-real worlds and an obsession with digital destiny. We are empowered by conveniently erected mythologies which justify our active participation in the brutality of violence. In the screen world, in the gamic multi-verse we willingly suspend our politics, our morality, and we actively seek death and destruction and health packs.

Some rough footage of Blue Leader performing on a tour with Videohippos here.

robby wrote comics starring blue leader and an unnamed yellow man. these were often to criticize video games that were coming out. 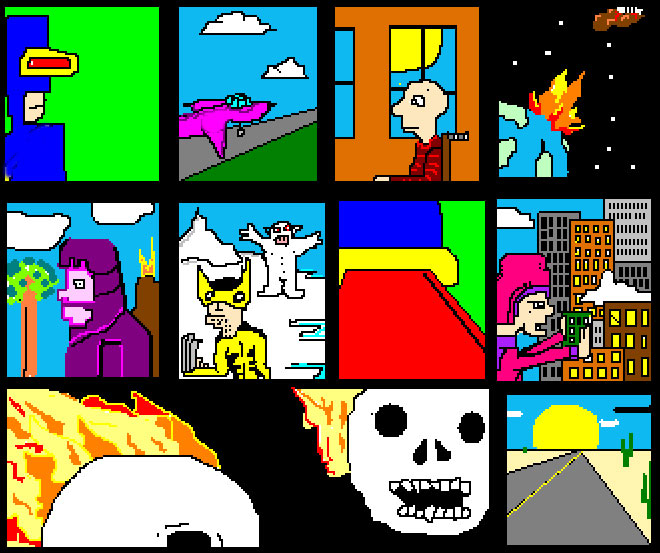 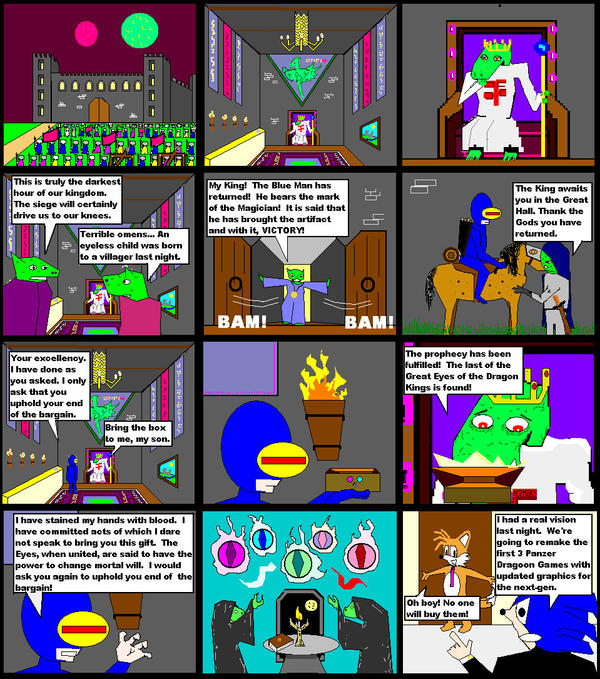 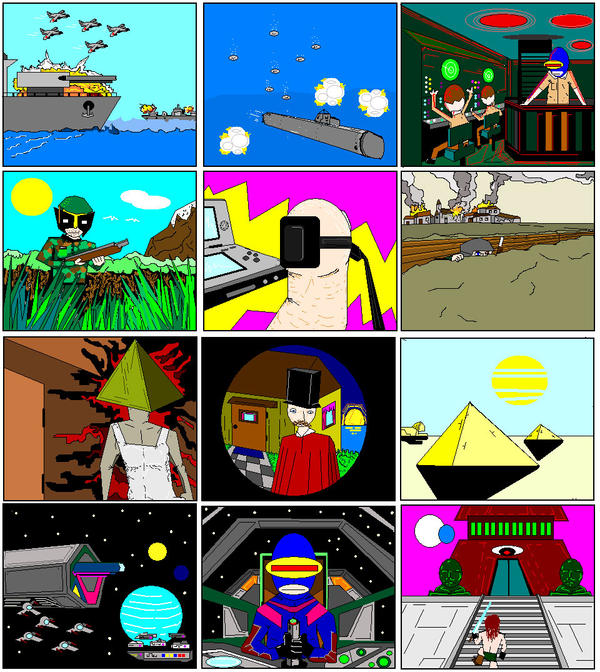 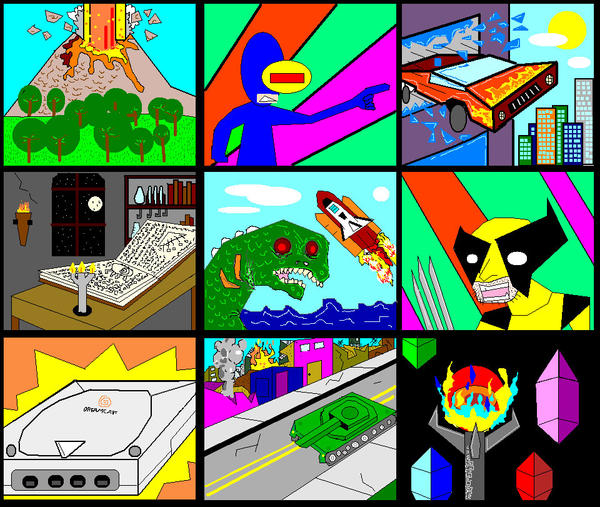 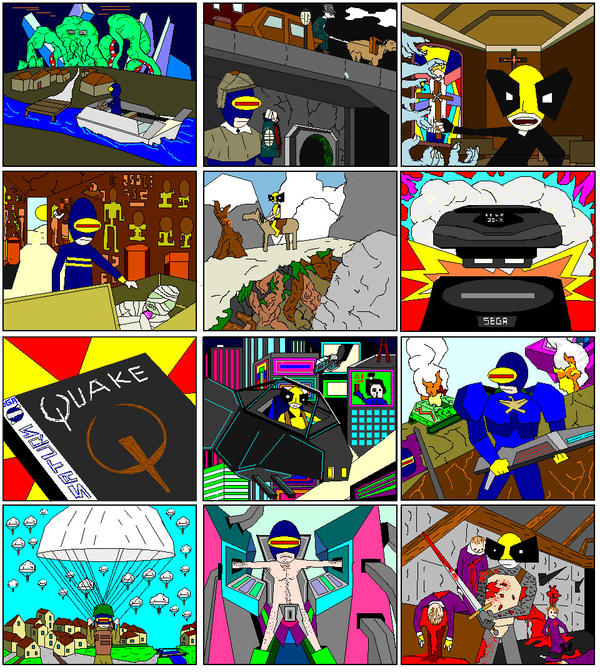 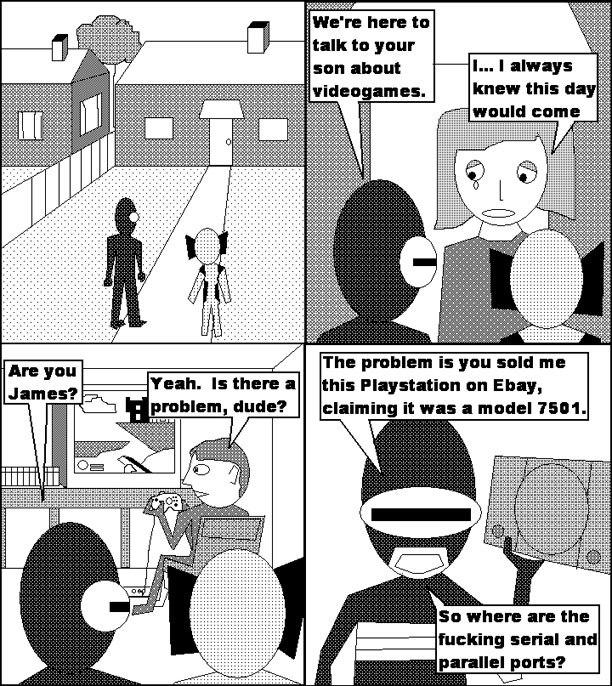 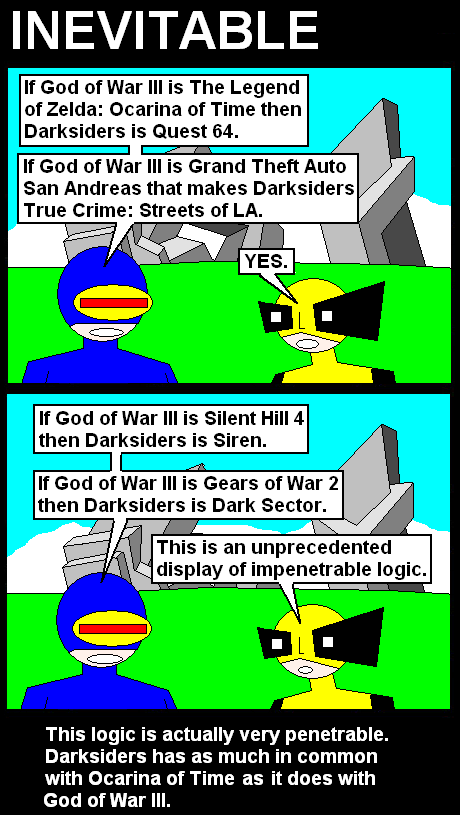 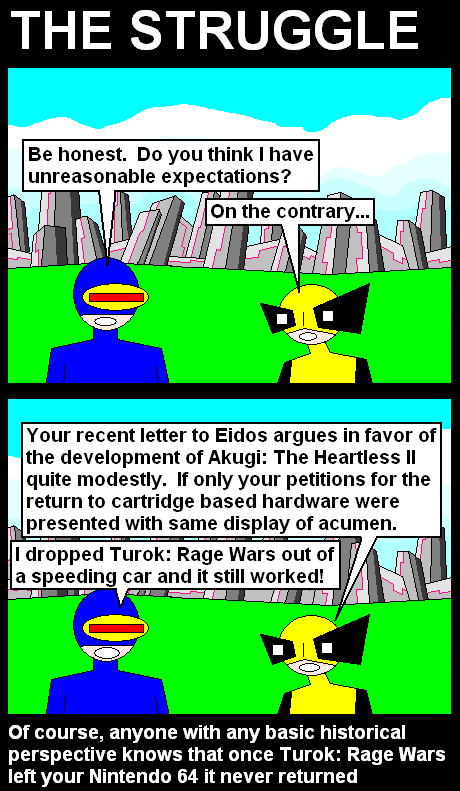 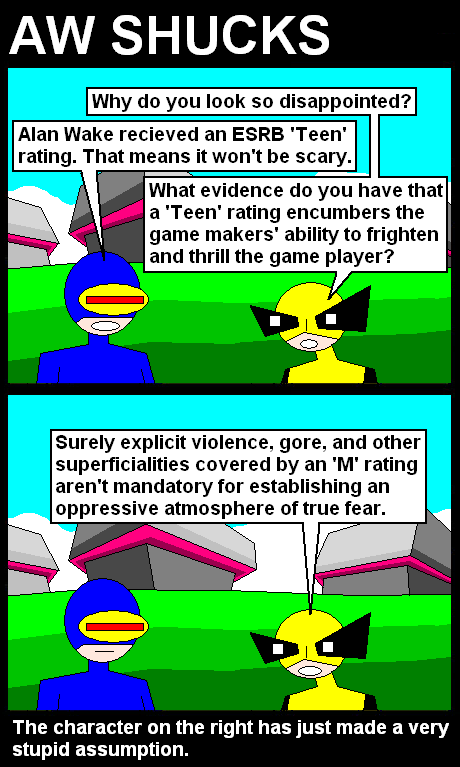 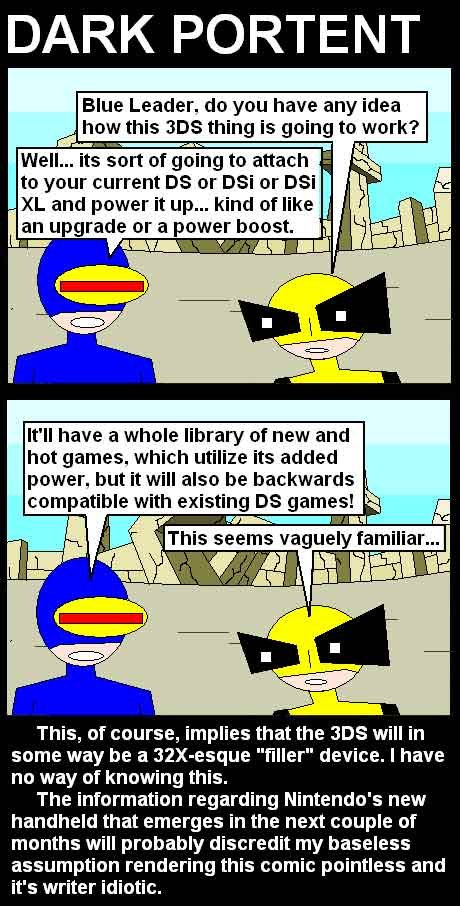 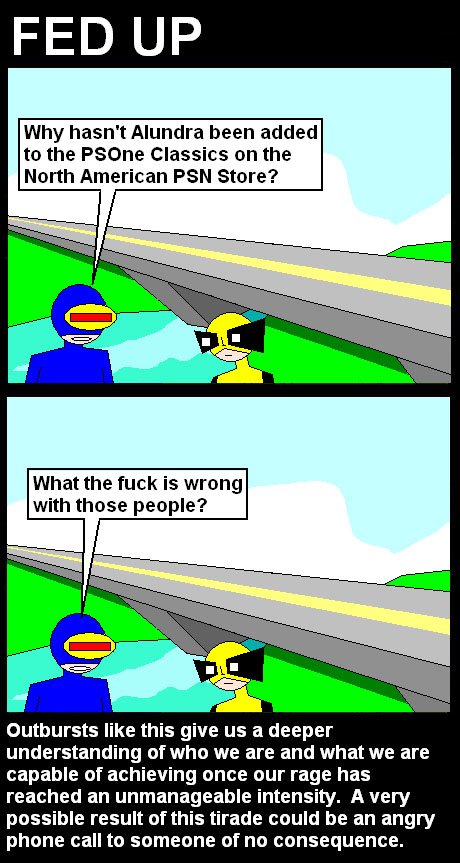 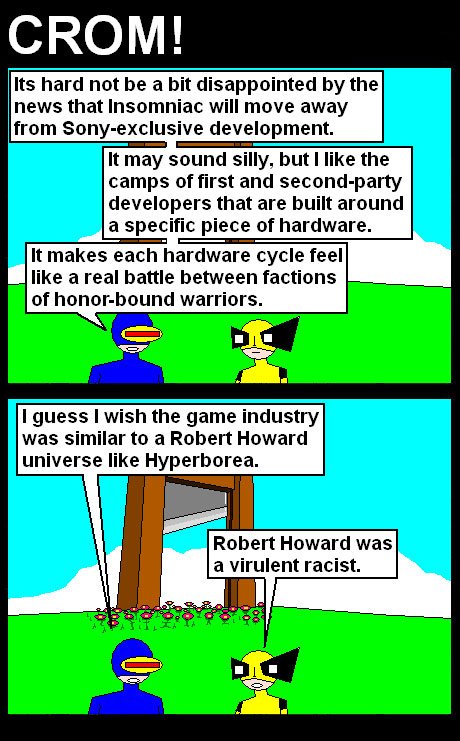 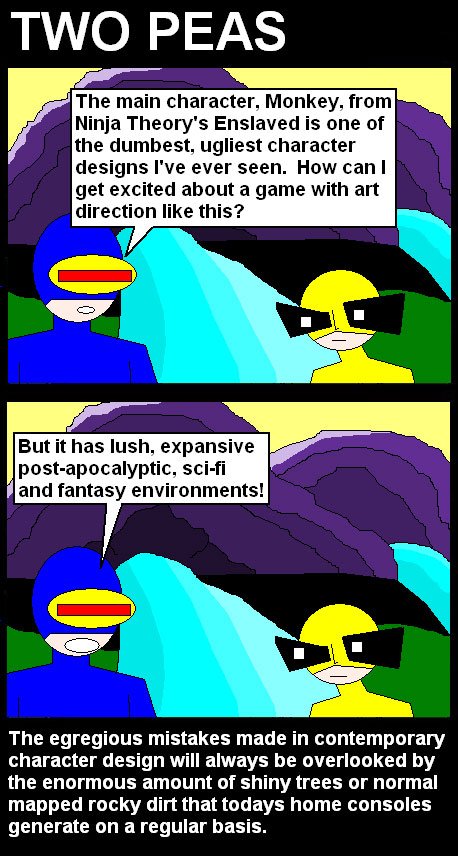 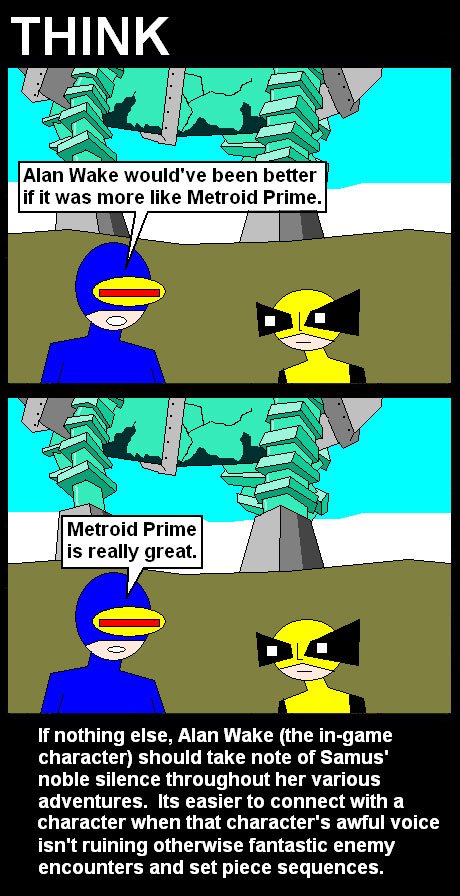 a playlist i made consisting of mostly robby's performances as blue leader, but also spme dfomos and an appearance in a dan deacon music video:
a performance i found on vimeo:
robby performing as blue leader for the egi classic 2008 goty awards 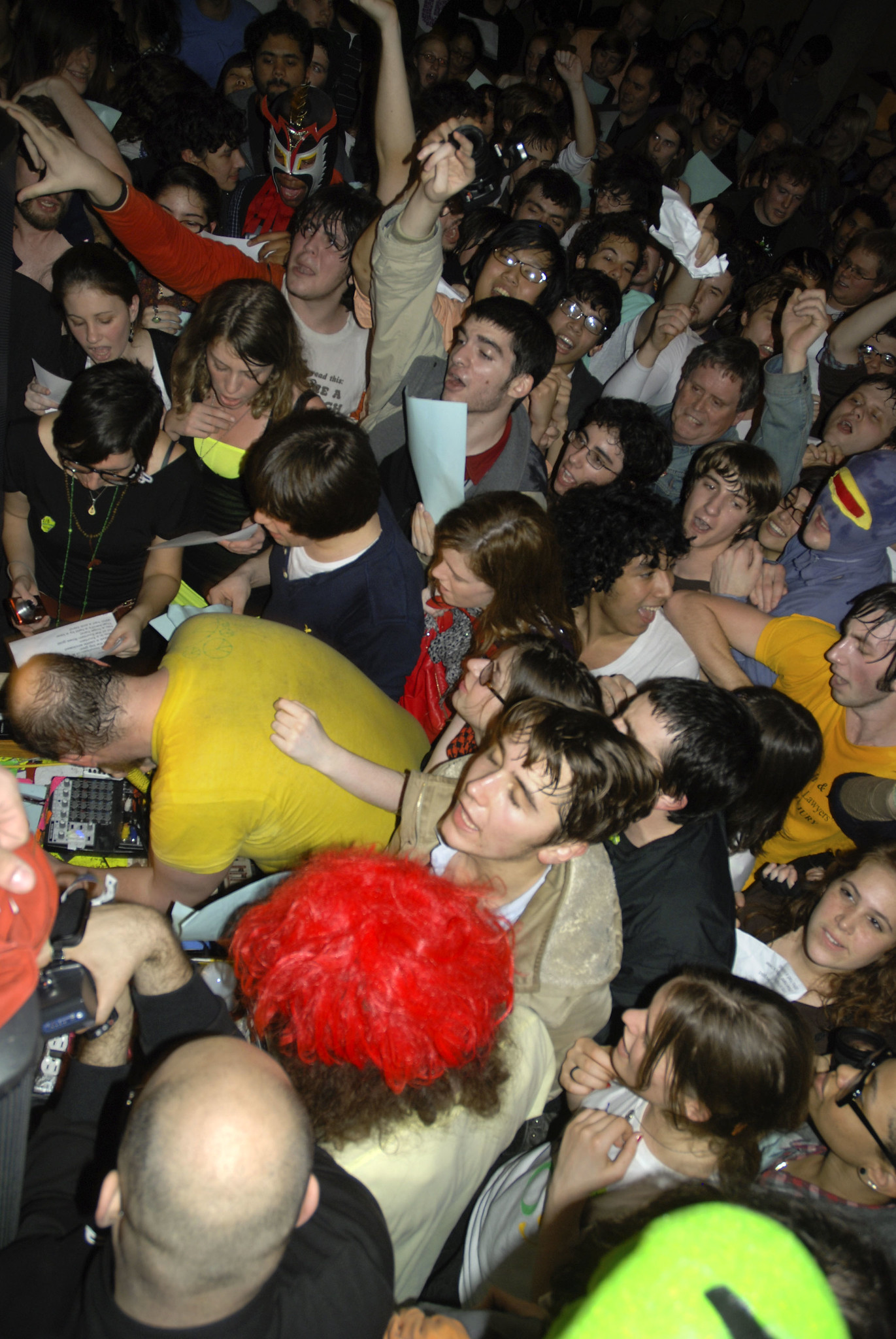 from robby's myspace (hover for titles) 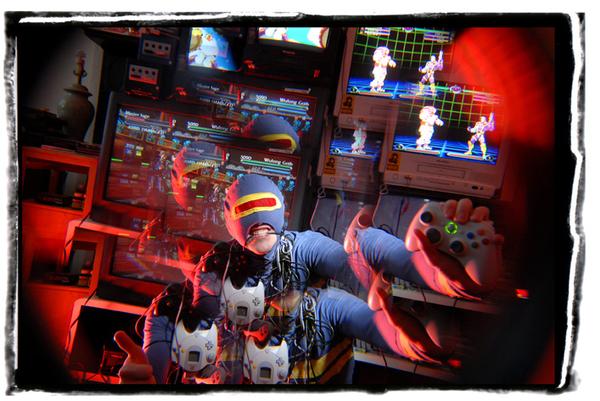 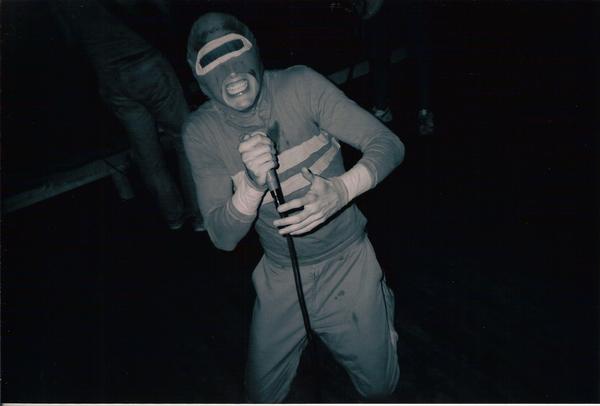 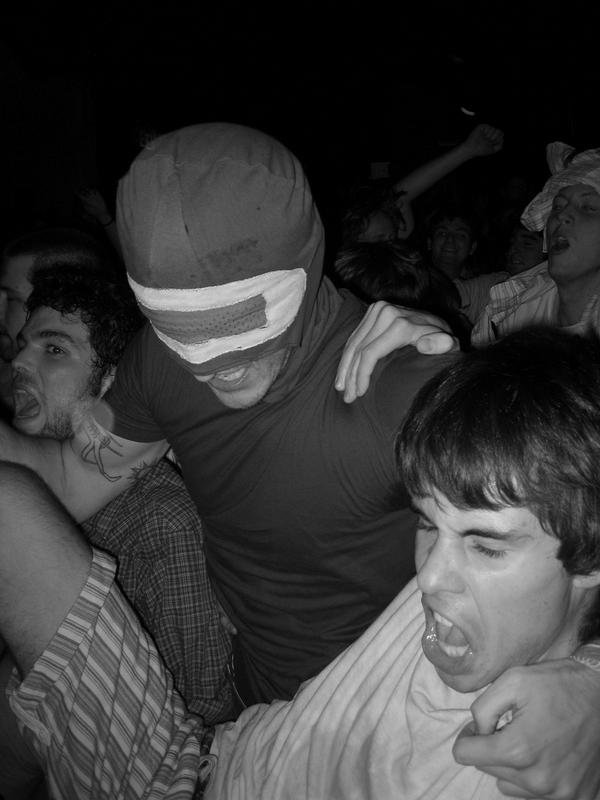 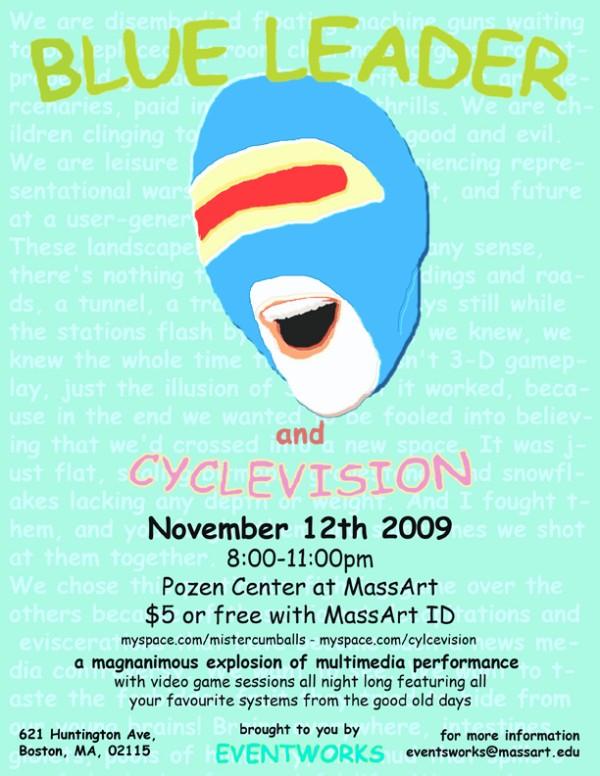 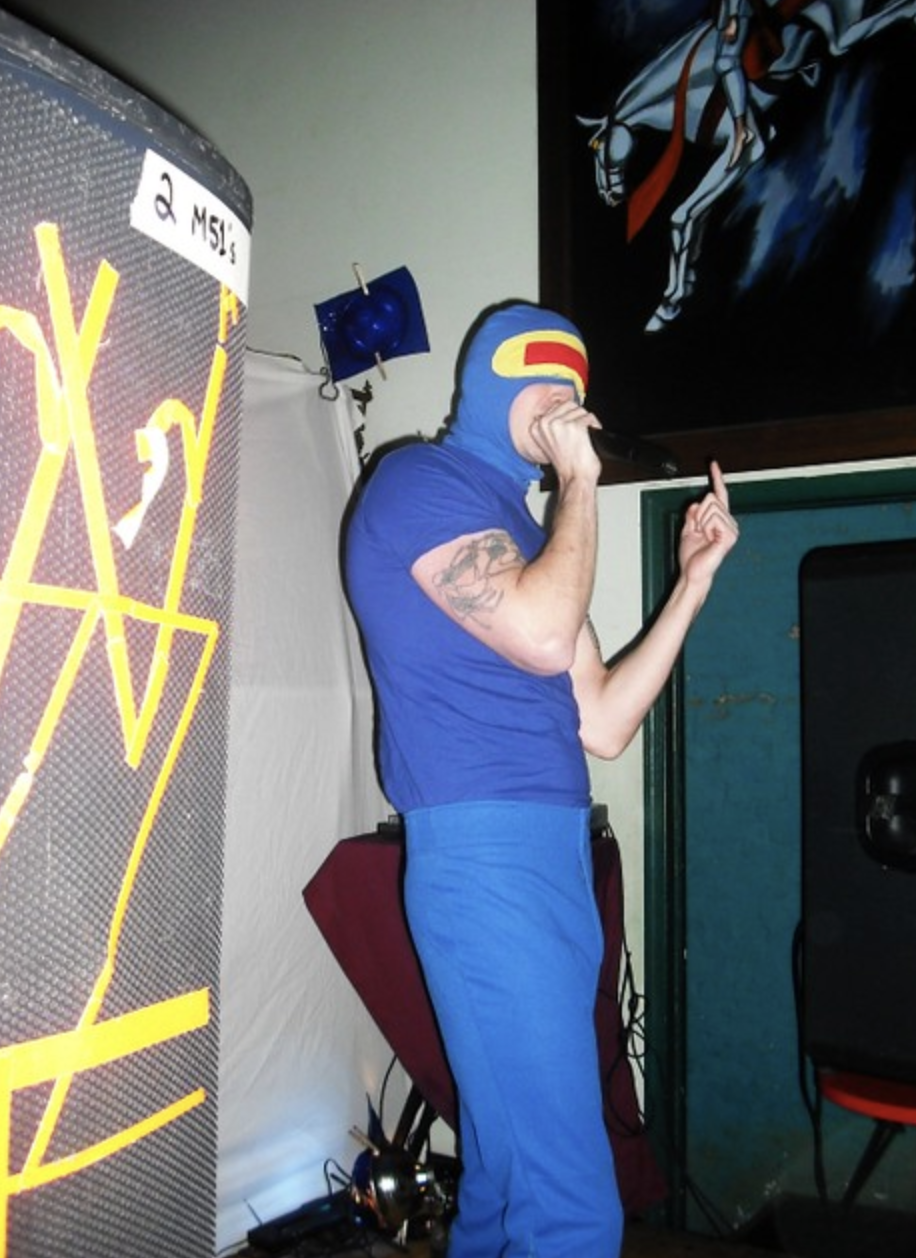 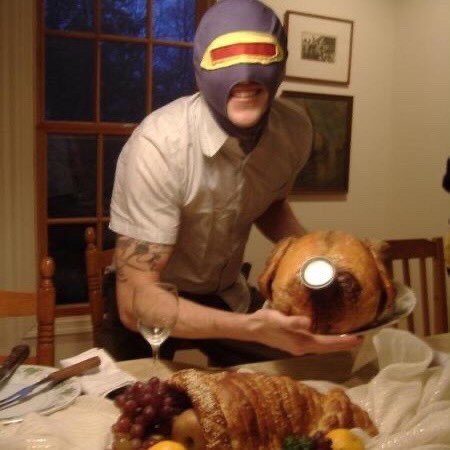